Idea PUK Code: How to Get PUK Code For Idea SIM

Idea PUK Code: In this article, I am going to tell you about the Idea PUK (Personal Unblocking Key).

After going through this article, you will know:

Are you ready to know about Idea PUK?

Then let’s dive right into it!

As stated above, PUK full form is (Personal Unblocking Key). It is a unique feature available in every smartphone and mobile phones out there,

Mostly, the Personal Unblocking Key or PUK is used when someone is trying to harm your SIM (subscriber identity module) card.

However, your smartphone or your device gets Automatically locked after entering the wrong PIN code 3 times.

Do you what is the PIN code?

Moreover, the PUK code doesn’t have any kind of pattern. It is unique for each and every operator and Unique for every sim card.

So how to unlock the Idea PUK code?

Below are some methods using which you can Unlock your SIM card easily, make sure to use them carefully.

Nonetheless, if you are the one who already entered the wrong PIN code for more than 3 times then don’t panic while using the below methods.

Otherwise, your sim card gets permanently disabled including all the contacts. 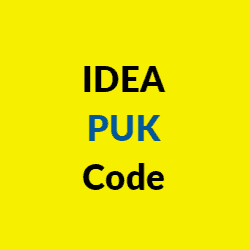 How to Get PUK Code for Idea:

1) First of all, insert your Idea SIM card on your smartphone phone or Mobile Phone.

2) Now turn on your smartphone phone using the power button.

3) After that open the dialer app on your smartphone and then enter the below-given code.

5) Now tap on the call button and then a POP-up will appear on your smartphone screen.

6) Follow the on-screen method to unlock your Idea PUK code.

1) First of all, open your smartphone and then enter the below-given Idea customer care number.

3) Then, you will be connected to the Idea Executive after following the on-call instructions.

4) Now ask the Customer care executive about the Unlocking of Idea code.

5) The customer care executive will ask you some questions and verify your identity.

6) Then the Idea customer care executive will provide you the PUK code of your Idea mobile number.

2) After that, open Gmail.com and then click on the compose button on the left side.

3) Now enter this customercare@idea.adityabirla.com Email address in the “To” section.

4) Then enter the subject and the message that you need the code number of your mobile number.

5) Make sure to enter the full information including your Mobile number.

6) You will get a Reply from Idea support with the PUK code of your Mobile number.

7) You can also goto the Idea store nearby you for the same problem.

At this Point Check Related Articles: